The Power of Charisma (Part 2) – What is charisma? 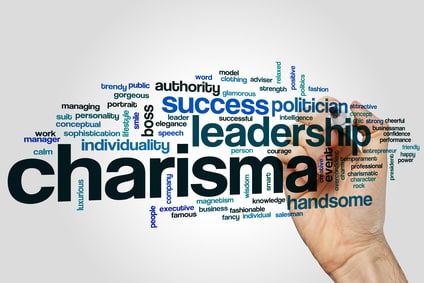 In my previous blog I set a series of questions to find out whether you might need help building your charisma, and if you haven’t read the article, take a look at our ‘charisma help’ questions.

Let’s return to the last question on that list: ‘Are you suspicious of charismatic people?’ If yes, it could be that you have misunderstood what charisma really is. So let’s pull it apart and examine how charisma functions.

I have worked with some of the most charismatic people in the world: politicians who have built their careers on having charisma; business leaders who have represented some of the world’s most trusted brands, and whose actions can make or break a company; and with entertainers who appear in front of millions with little else to fall back than the force of their personality. What is it that they have in common? And what can we learn from them?

Let’s start by looking at actors and entertainers, because when they use charisma, they use it consciously, ‘turning on the charm’, if you like, though there is a lot more to it than that. For example, take a look at the actor Brian Blessed in the 1976 TV serial, I Claudius.

One of the notes given to Blessed by director Herbert Wise was not to play the emperor as powerful, but to let other characters treat him as though he was. The truly powerful do not throw their weight around: they don’t have to. Think also of Marlon Brando in The Godfather. This is a key part of what makes charisma work: it’s not something one person has. It’s a dynamic between one person and another person, or group of people. These people who play powerful figures on film are acting with confidence, but it is just as important that the rest of the characters act with them as though the figure is the most important person in the room. It’s all about being powerful without looking as though they have to work too hard to remind others of the fact.

Let’s be really clear about this: charisma is not something you can ‘do to an audience’ – it absolutely has to be a two way process. In my previous blog I looked at politicians who have passed and failed the charisma test. To look at this from a different angle, I’ll examine charisma in comedy to illustrate the relationship between speaker and audience more clearly. During our speaking training workshops I often ask delegates to watch this piece of footage of Smithy from BBC Sport Relief.

A few of questions before you read on:

This is a clip that has divided PS Programmes Towers: some of us think it’s hilarious (Nadine, Ross, Denise, Rasheed and so on) and some of us (Ian and Tom) find it leaves them cold. I think the answer to question one depends entirely on how you answer the other questions.

Jimmy Carr is wont to say that ‘if you think I’m not funny, you’re right’ which is a neat way of saying we all have our own sense of humour, and we’re all welcome to find him entertaining – or not. One thing Jimmy Carr isn’t is needy: he knows he can’t please all the people all the time, and makes a very good living from the proportion of the population who go to comedy gigs. Non-comedians occasionally think they can insult a comic by telling them they’re not funny; it’s not an insult, because it’s not a comment on the comedian’s talent, so much as an acknowledgement that they are the wrong audience member.

Back to the BBC Sport Relief clip. What James Corden is doing throughout is playing a game with the audience: he’s poking fun at people who are being celebrated for their sporting ability by taking himself far more seriously despite being – well, shall we say less than a prime example of athletic ability? He’s setting up the rules and leading the game, and the audience plays along, buying into it. It’s rather like pretending to be a more step and chasing a toddler around the garden: understanding and buying into a game (even unconsciously) is something many of us do before we learn to talk, understanding relationships is far more basic a skill than speech.

Charisma, we can agree, isn’t in what you say, and I’d argue, not even in how you say it; one approach will not have equal success with every audience. True charisma comes from being an active participant in a relationship with an audience. This is why when I coach presentation skills, I am very conscious that I shouldn’t be too prescriptive. Standard public speaking coaching (and most books on the subject) will admonish speakers for using filler words (‘you know’, ‘erm’, ‘ah’, etc.) but I know that sometimes a well-placed ‘um’ can signal to the audience that the speaker shares their confusion on a topic.

Charisma is not something that can be switched on or ‘done to’ an audience. Charisma has to be a dynamic, and the person who is in control of the dynamic is the person in charge of the charisma.

I think that status is the key to this. One of my three golden principles of public speaking is ‘authority’ – the notion that the speaker must be in command of themselves and the space. Let’s go back to the comedians for a look at authority: what is a heckler, after all, but someone trying to pull status from the performer?

Dealing with hecklers is easy (and fun) to Google, but the results aren’t always safe for work. Here’s an office and family friendly clip of John Bishop.

Note that the first thing John Bishop says when asked is that in the arenas he plays, hecklers are not a problem because they are too far away. This is the common complaint of the arena comedian – they are literally separated from the audience, which makes building a relationship with them more difficult.

The other good observation from John Bishop is that hecklers ‘haven’t done as much heckling as you’ve done gigs’ – and then he immediately shows how he would take control of the situation, playing up the heckler’s inexperience.

Dealing with hecklers is one of those things that is a lot easier than it looks: all the power (the spotlight, the amplification, the fact that people have paid money to see the name on the poster) is with the performer; new comics who doubt their status are the only ones really vulnerable to hecklers. The trick to dealing with hecklers is to play up your own non-verbal trappings of authority, highlight the heckler’s weak position, and respond according to your personality. The ace up the sleeve of every performer is that they have been paid to turn up, and the heckler paid to get in.

Putting all this together, what’s my final definition of charisma?

A charismatic person is someone who:

Has status (legitimate or not) and

Responds to the audience …

…With affirmation. In effect, you are giving the audience a little boost of status by allowing them to share yours, without them having to take any of the risks of claiming leadership.

It’s easier to see this dynamic when it breaks down. There are three ways in which attempting to be charismatic can backfire.

When charisma can backfire

Great speakers intuitively understand that getting charisma is the process of getting status fast – and then letting others share it in a controlled manner without diminishing your own stock.

If you feel held back from achieving this, you’re probably experiencing an anxiety that a lot of smart people suffer from. Ever since Socrates told us that, ‘The only true wisdom is in knowing you know nothing,’ some people have felt nervous about pulling rank, or being seen to be too fond of their own achievements in public.

One of the requests that I get time and time again as coaches is that speakers would like to feel more confident. And while there are some practical steps towards achieving this, a lot of confidence is in being comfortable with who you are, what you do, and when to take charge.

Anxiety about public speaking really is anxiety about putting your head above the parapet and saying ‘I am the leader’ whilst you are speaking in front of people and commanding an audience’s attention.

In my next blog, I will be looking at a few tips and exercises that can inject more charisma into your speaking: from some quick and easy tricks, to a new way of approaching a speech.