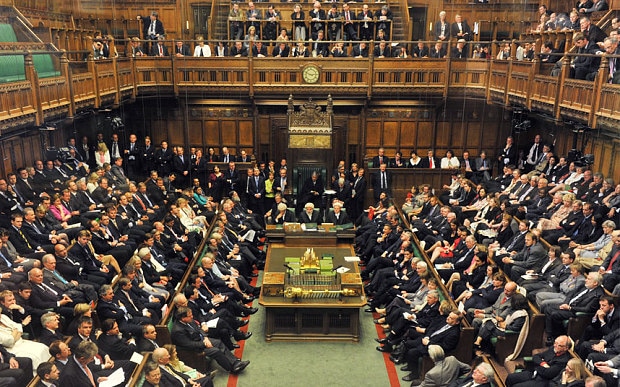 Former Foreign Secretary William Hague, canny political operator that he is, used to coach the then leader of the Opposition David Cameron for Prime Minister’s Questions (PMQs). The trick, Hague says, is to phrase the question so that it is unanswerable, as an example: ‘Does the Prime Minister believe in Father Christmas?’ A ‘yes’ will be reported with scorn. A ‘no’ will be reported as the PM ruining Christmas for millions of children.

PMQs is always exciting, particularly when a new leader makes their first appearance and stamps their style on proceedings. Cameron said he wanted to ‘put an end to Punch and Judy politics’ – what, seven, eight years ago? However he might as well have made that promise while dressed up as a policeman tug o’ warring a string of sausages with a wooden crocodile. Jeremy Corbyn, the new Labour leader (though some would say very much ‘Old’ Labour leader) went some way to making good on this ambition when he took to the dispatch box for the first time to put Cameron on the spot.

You can watch the showdown for yourself here.

The problem with Punch and Judy politics is that the Punchiest politicking of all happens at PMQs – and it’s also the most popular of all the parliamentary proceedings. There are some who are riveted to the Commons Transport Select Committee, others who thrill to the Private Members’ Bills, but it’s PMQs that are Westminster’s Super Bowl (minus the pom-poms).

It remains to be seen whether Corbyn sticks to letting the public ask the questions. It’s a mixed bag of a strategy. The strong advantage of it – is that the Prime Minister cannot adopt his usual tactic of rubbishing the opposition – because he would then be rubbishing a voter. Cameron will have to at least give the question a certain level of respect. Some reports say that Corbyn had over 40,000 emails from the public to pick from – and at least a couple of those should satisfy William Hague’s formula for a ‘no right answer’ question.

For a leader who has been described as ‘unelectable’ in a Westminster bubble, who they themselves have been described as divorced from real life, this is a very clear message from an Opposition Leader under siege from a hostile press. ‘You do have a voice,’ he is saying to voters, ‘and come polling day, you make up your own mind.’

The downside is that for many, PMQs is the most regular moment in the spotlight for the Leader of the Opposition. If he carries on using a JPQs strategy, Corbyn risks not only disappearing behind others’ questions, he could also be seen as being an ineffective political presence. So long as the PM responds respectfully to the question, the weekly outing could be a walk in the park for Cameron. Corbyn will win himself no favours if he fails to land a few punches back on the Government. And what if Corbyn wants to change his strategy and asks questions of his own? He risks looking disingenuous – or of using the voters’ questions as a gimmick.

There is another problem. We elect our representatives to speak on our behalf. Corbyn may tout himself as a man of principle (and that’s why so many people voted for him) but is this displaying leadership – or following the tides of his post bag or inbox?

One of the reasons why PMQs gets the ratings, is that it is dynamic. British politics are by nature adversarial, and sticking to a script is not a good strategy. By using questions from voters, Jeremy Corbyn essentially handcuffed himself to a script, which left no room for rebuttal. The best public speakers often struggle with a script in front of them as this cuts them off from the audience by preventing them from responding to what is happening in the room. As one of the PS Programmes coaches said to a speaker recently, ’speaking someone else’s words is like being in a double act where the other person is invisible but in charge.’ Good actors can make a script come alive in the moment. When speakers manage the same trick, it shouldn’t be noticeable. At PMQs, it was noticeable.

In short, whether or not Corbyn uses voters’ questions next week could be the decider. If he does, he will have to stick with it. If or when he does drop the idea, he can expect another drubbing in the media.

Not that bad press seems to be his concern.