A woman’s place is in the House of Commons 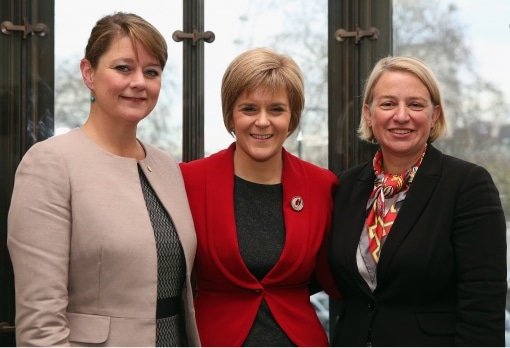 So the votes have been cast, the results have come in, and Britain is slowly finding out what a majority Conservative government is going to mean for the next five years. Gone are the LibDems (a soft-hearted check on the political rudder or an ineffectual nuisance, depending on your view), but while they and Labour root around for a new leader, and UKIP do their best to recreate the murder of Rasputin (Nigel Farage seems impervious to earthly weapons, and throwing him bodily into a freezing river is starting to look like the only option for getting rid of him), the opposition is effectively being led by the SNP and Nicola Sturgeon, ‘the Most Dangerous Woman in Britain’ (not my opinion, but Piers Moron, sorry Morgan).

Women have enjoyed a sudden resurgence at the political front line after five years of Messers Cameron, Clegg and Miliband, and more lately, Farage. Nicola Sturgeon – who could have been a minor player today if the Scottish independence referendum had been held this autumn rather than last – saw her stock rise sharply after the leadership debate, Natalie Bennett had a bumpy ride when she stumbled over an early start and tricky statistics, and Leanne Wood spoke up for Welsh independence. The leadership debate no longer looked like three white men quibbling over income tax percentage points; it started to look representative of the electorate.

Although there is much talk of David Cameron promoting women into his new all-Tory cabinet, we can’t work out whether this is because women have been under-represented previously or women in power is what excites newspaper columnists. Either way, he is only reflecting the makeup of the Commons in which 29% of the MPs are women. Though some way off a balanced 50-50 split, it’s worth remembering that the number of women candidates in the election as a whole was only 26.1% , so when it comes to elections, women are punching above their weight. We’re not going to get into the debate about all-female shortlists (not right now, anyway), but clearly getting more women standing for seats is the way to move this forward.

The next parliament, we think, is going to be crucial in how many women stand in the 2020 poll. Early indicators are looking good – and it’s not only about making the workplace ‘friendlier’ towards women; it’s about how the political landscape is becoming a more hostile environment over all, and how women are better placed to cope with it.

The media likes to have nice strong characters, and Ed Miliband’s treatment on the front pages is a very good example. Labour supporters would routinely get uppity that their leader wasn’t being presented in a nuanced light, that the ‘real’ Ed wasn’t allowed a chance to shine. PRs and campaign managers know that a strong enough caricature can be powerful enough to colour our view of the real person: stumbling as you walk off a brightly lit stage and into the darkened wings is something that could’ve happened to any of the leaders as they left the Question Time platform. Unfortunately, it happened to Miliband, and while anyone else could’ve laughed it off, it only underlined the Labour leader’s reputation for gauche awkwardness.

Nicola Sturgeon has also been at the sharp end of the satirist’s pen in being compared to a Scottish variety act. And take this opening paragraph from the Daily Mail:

‘It’s one of the most striking style transformations in British politics. SNP leader Nicola Sturgeon has left her boxy jackets and severe suits in the past – and she proved her new style credentials with a stunning appearance yesterday morning.The 44-year-old looked particularly glamorous on her way to BBC’s Andrew Marr Show in a fuchsia column dress that flattered her slimmed-down physique.’

The writer, who perhaps sensibly hasn’t given their name, declines to tell us what Mr Marr was wearing, what it cost, how his hairstyle suited his face or whether he’d lost a bit of weight recently.

Although it’s tempting to get upset by this sort of thing, it’s more useful to count to ten, take a breath and notice that it’s all rather old fashioned and a sign that this paper is sometimes out of touch with real people. And then remember that this is the same paper that ran stories about how Nick Clegg was losing weight in the run up to polling day – so everybody is getting the same (unfair) treatment. Politics has always taken the mickey out of how people look: ten years ago, all the jokes made today about Eric Pickles would’ve been divided between Ann Widdecombe and John Prescott.

Many aspects of political life are unfair, with damned if you do/damned if you don’t situations being set up on a daily basis. Despite the old line that ‘politics is show business for ugly people’, image is becoming more and more important. In a complicated world, and with more minority parties having more of a say in government, deals between parties and cooperation are going to be more important than adversity and bullying. And that, to us, looks like just the sort of politics women could do very well at.