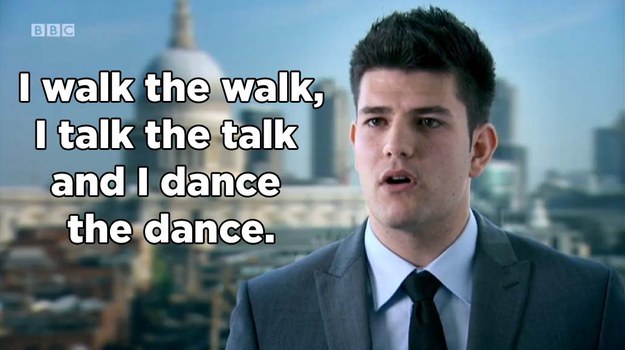 This year, we’ve sat through Gone Girl, Night Crawler and Gravity, but nothing made such breathless and squirm-inducing viewing as The Apprentice winner – Mark Wright’s relentless discomfort when facing three perfectly nice-looking people who may or may not have liked his trifle. Though Horrible Bosses 2 came close.

By his own admission, Mark’s mind was elsewhere. Most of us have been in the middle of saying something when the brain starts working along a completely different narrative: ‘It’s really important I impress this person. I’m making a fool of myself. I’m saying things I’m not thinking through. What am I saying? Isn’t it amazing that I can still form sentences with my mouth while I’m thinking this?’ And then there is no disguising the panic in your eyes as mouth and brain finally divorce and live, amicably but separately, in different countries having little to do with one another and getting on with their own affairs.

Then there was ‘The Cough’. Some people ‘um’, others ‘er’, Mark squeaks out a little cough. It’s particularly excruciating because it is a clear indicator of someone being totally out of control of their nerves. John Freeman, best known for his interrogation-style interviews, died this week. Freeman’s interview with Tony Hancock has been singled out as the point at which the comedian tipped irretrievably over the edge into alcoholism. He would’ve made mincemeat of Mark. Watching Mark stumbling through a pitch, we were yelling at the screen: ‘Get one of your team mates to take over while you pull yourself together!’

Anyway, he won – just. And even if you think that going to pieces so fast people get hit by shrapnel is charming at first, the gloss wears off after a while and it really isn’t compatible with being the sort of arrogant über-businessman that The Apprentice has conditioned us to expect. Performing under pressure is about focus: know what it is that you have to do. Whether it’s a speech, a pitch, or standing on the starting blocks of the 100m Olympic finals, if your mind is elsewhere, you won’t be at your best. Mark’s big mistake was spending all of his preparation time ‘bigging’ himself up and talking down his rivals rather than getting familiar with the actual product. In a pitch situation, quiet confidence is more persuasive than delivering a half-remembered TED talk: Bianca may have come second, but she knew how to put thought, time and effort into her pitches, a lesson Mark learned just in time to save his skin in the final, (with the weak cough mainly under control).

On the subject of friendly rivalry, we’ve been scoping out the presentation advice out there, and found several results for the search ‘100 public speaking tips’. Good luck with remembering all of those when you step up to the podium. To perform at your best, less really is more. Nick Hewer made his name with a raised eyebrow here and a pursing of the lips there. Part of Nick’s charm is that he isn’t trying to prove himself all the time: those who do aren’t focusing on their audience, they are thinking about themselves.

Mark may well follow in the footsteps of previous Apprentice winners (and Nick and Karren Brady for that matter) and go on the corporate speaking circuit, in which case he will definitely have to sort his nerves. If he wants to still be making money from speaking after the next Apprentice winner has been chosen, he’s also going to have to deliver a message more compelling than ‘I’m great’, in which case we can suggest no finer addition to the wish list of Mark, or indeed anyone who needs to know how to get a brilliant idea over to a skeptical audience than our very own Insider Secrets of Public Speaking. With three guiding golden principles (Authenticity, Authority and Audience) and a host of practical applications, it’s the ultimate guide to mastering the essential transferable skill: proficiency in public speaking will serve you well whether you are being interviewed, leading a team or pitching an idea.

And so PS Programmes is putting up the shutters for a couple of weeks after a busy and productive year. To friends, readers and clients past, present and future: have a wonderful festive break and here’s to a happy and prosperous New Year!